I couldn’t put the book down. I love how this mom tells her story of the accident and all the miracles & medicine that followed that kept her son alive. You will never doubt the power of prayer after reading this book. Have a tissue ready when you read it because you actually feeling like you are right there with her every step of the way.

A big shout out to Judy McKenna, Director of Nursing Education, for inviting me to come and speak with the Nursing students at Alma College.  Finding Hope on Vegas was a required read last fall for many students in the Alma Nursing program.  I can not wait to hear the students’ perspectives on the book and answer their questions.  Wish me luck!

Need a reason to read Finding Hope on Vegas?  Here are a few. 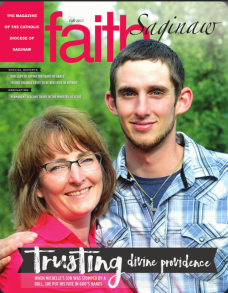 Nate’s bull riding accident is the fall 2017 cover story for the Saginaw Faith magazine. Author Erika Hirschman does a great job summarizing the events documented in  Finding Hope on Vegas. Thanks to Sarah Moore Kuschell for the fantastic pictures in the hops field.

Nathan and his bull riding accident were featured in  Michigan Blood’s August cover story. It is a great article that emphasizes the importance of donating blood.  Donating is an easy way to save a life! You can view the article in full here.

I will be at Horizon Books in downtown Traverse City just in time for the holiday season.  Stop by and get your signed copy of Finding Hope on Vegas. It makes a perfect gift!  I look forward to meeting you and hearing your own incredible story.

I have been invited to speak by the Golden Agers about the events that inspired the book, Finding Hope on Vegas, tomorrow, Oct. 10, 2017, at the Sage Township Hall. If you have not heard about the story, come and join us as I summarize the miracles, support and love our family encountered on Aug. 9, 2014. It is an incredible story of faith, hope and love.

I will also touch on how my post traumatic stress journal became a book. Since I am not writer by nature, I consider the whole process from journal, to development, editing and publishing this book a small miracle all by itself.

I look forward to seeing you, and if you have not had a chance to get a copy I will have books available after the presentation.

Eighteen and three-fourths gallons of blood was needed to save Nathan Davis. Yet, throughout this tragedy the Davis family found an unexpected gift by an unsuspecting giver: hope on a bull named Vegas.

Although summer has ended and school has started, I have still found some time to promote Finding Hope on Vegas.

Next week I shall be visiting the Golden Agers at Sage Township Hall in Gladwin Michigan.   They have invited me to share the story with them. So if you have not had a chance to get your copy, I will have plenty available!